Get notified of new posts

While the conflict in Ukraine’s coverage overshadows the rest of Russia’s periphery in western media, a new theater may be reopening within the region. Georgia, a key American ally in the Caucuses, is facing internal protests and economic punishments from Russia, and could very well become the next epicenter in the clash between Russian and Western interests.

Georgia last came to America’s attention during the 2008 Russo-Georgian War, when the Russian government, claiming the need to protect the rights of minorities in South Ossetia and Abkhazia, established a military presence to “secure” both minority rights and the borders of newly founded Russian allies. The ‘West’, however, viewed these as acts of Russian aggression. Today, U.S.-Georgian relations are characterized by the United States’s promising support to help the smaller nation feel “secure in its borders,” and Georgia’s membership in NATO’s Partnership for Peace program—a program President Clinton once described as, and remains, a path to NATO membership. But the quiet ethnic tensions within Georgia are taking a turn for the worst, as protests continue for over a month and Russia retaliates to “anti-Russian” sentiments from the Georgian public. 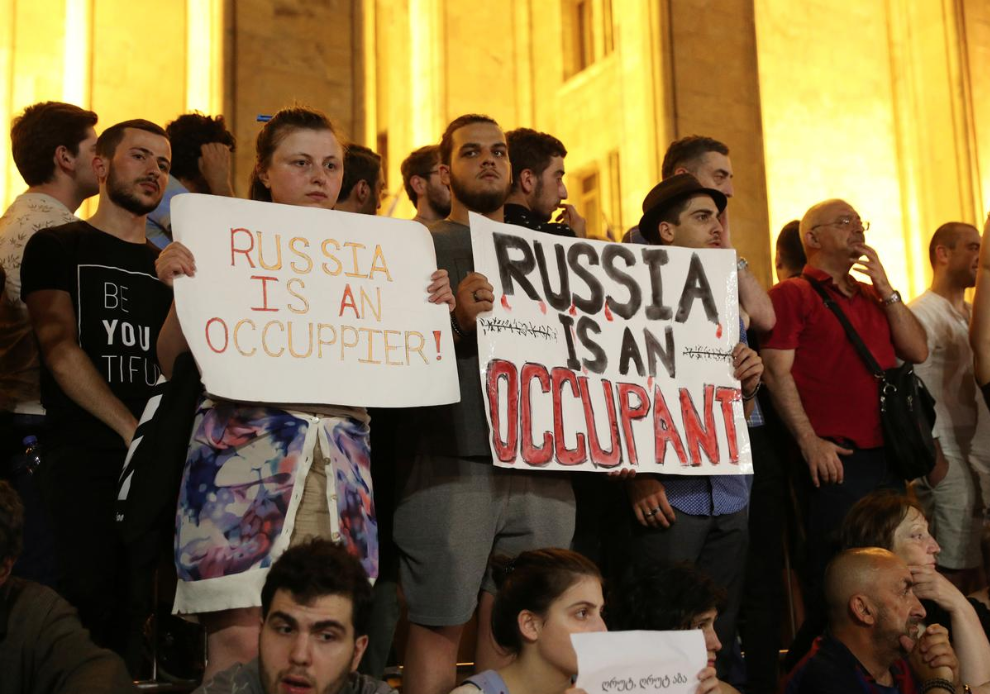 Protesters attend a rally against a Russian lawmaker’s visit near the parliament building in Tbilisi, Georgia on June 22, 2019. Photo: Reuters/Irakli Gedenidze

While relations between the two countries have warmed since the 2008 war, many Georgians still feel resentment over their defeat; resent made worse by both the presence of Russian troops in what they view as part of their country, and unaddressed anger from the victims of targeted ethnic violence—violence both sides have been accused of. civilians done by both sides in the 2008 war. That being said, Russian tourism into Georgia has been rapidly increasing, with 1.4 million Russian tourists, representing over 16% of total tourists having visited the neighbouring state in 2018. With tourism accounting for at least 20.8% of the Georgian economy, it should be no surprise that Russia has also become Georgia’s largest trading partner, receiving 13% of Georgia’s 2017 exports, mostly in wine and iron. This change can be attributed to the work of Georgian Dream, a party that came to power in 2012 promising to normalize relations with Russia; these efforts have, naturally, earned them accusations of being Kremlin puppets and the pathway for Russian domination.

The conflicting sentiments between the pro-Georgian populace and the pro-Russian administration have finally come to a head in the aftermath of the June 20 visit by Sergei Gavrilov, a Russian parliamentarian from the Duma, to Georgia’s parliament. Gavrilov was invited as a representative of the Interparliamentary Assembly on Orthodoxy, a transnational Orthodox organization; one of the many ways in which Russia exerts influence over its neighbours. While at the Georgian parliament, Gavrilov sat in the Speaker’s chair, reserved for the highest-ranking member of parliament, and addressed the parliament in Russian. Many Georgians saw this as an act of Russian imperialism, abetted by a corrupt, puppet government, and took to the streets outside the parliament in Tbilisi, Georgia’s capital.

The first night of the protests, gave rise to a violent clash between the people and the government, with police immediately resorting to tear gas and rubber bullets. By morning, reports of protesters having been shot in the eye by rubber bullets were adapted into a symbol of state violence; protesters began to wear eye patches in solidarity with victims of police brutality, and to highlight violent action taken by the government. Seeking to appease the protesters, Georgian Dream forced the Speaker of the Parliament who had allowed his seat to be ‘occupied’, to resign and promised reforms to make the government more transparent—including a promise to remove a “5%-of-the-vote barrier” to allow more competition, and to convert the parliament to a proportional representation system.

The situation continued to deteriorate, and on June 24, Russia stepped in. Russia began to criticize the Georgian administration for not dealing with ‘anti-Russian’ protests; responding with threats to ‘tighten’ regulations on Georgian wine and water, suspending direct flights between the countries, stop money transfers into Georgia, and a host of additional threats targeting the smaller state’s economy. These threats by Russian politicians only served to embolden, the Georgian people, who became increasingly indignant as Russian pressure escalated. In response its populace’s growing defiance, the Georgian Dream administration began to target opposition political leaders. The ruling party voted to strip parliamentary immunity from Nika Melia, a leader of the former ruling party, and detain him on charges of inciting and participating in the riots.

Presently, the Georgian government remains in hot water among its people, who have been protesting for more than a month. These protesters demand the resignation of more officials and continue to call against Russian imperialism. Seeing this, Russian President Vladimir Putin has shifted his rhetoric in an attempt to try and calm the small nation. He stated that:

“Out of my respect for the Georgian people, [Russia] wouldn’t do anything that would exacerbate our relations.”

Russia did, however, ban direct flights between the two countries, claiming it was doing so for “unrelated reasons.” In the context of the calls for greater action from many lawmakers in Putin’s own party, Putin’s statement is a tempered one, especially when one considers that the Georgian opposition party’s news network, in an emotional tirade, attacked Russians, Putin, and Putin’s family. Given the personal nature of the political attacks and the history of Russian economic strikes on opposition states, what Russia has done thus far may actually be seen as small in comparison to what they could do to our ally. Regardless, given our ties to Georgia through international organizations we are forced to reexamine the issue of Western credibility competing with regional powers dominating their figurative backyards.

With Georgia’s 2020 elections approaching, and the public protests against Georgia Dream’s reconciliatory attitude towards Russia being called appeasement, the future of Georgian-Russian relations stands again at the precipice of becoming a booming powder keg in Russia’s periphery. The act of balancing economic benefits at the cost of domestic political capital is a dilemma that Georgia and many other states in Russia’s ‘Near Abroad’ face. Most countries which inhabit the region suffer from corruption and weaker economies than their Western counterparts, and so long as this remains, these ‘allies’ of the ‘West’ must decide whether it is more beneficial to stand against Russia and hope for Western support, or allow themselves to again fall under Russian influence. We, in the United States, should consider the ramifications of our approach to the brewing regional conflict and others like it, or otherwise be continuously caught in reactive conflicts blistering throughout Central Asia and Eastern Europe.