In the first week of April, the United States chose to snub a G7 meeting in favour of focusing exclusively on NATO. But while the U.S. has chosen to focus on great power politics, France has begun penetrating the now crowded soft power field in Africa to much success in former colonial possessions Algeria and Rwanda. Given France's success, perhaps it is time for the Trump administration to re-evaluate the role of soft power in American foreign policy.

While the current U.S. administration becomes increasingly focused on national security and ‘hard power’ issues, the rest of the world has begun to pivot back to valuing soft power, a pattern demonstrated by France’s courting of Africa. Both NATO, a military alliance, and the G7, a multinational group of the seven largest economies, met in the first week of April, but one of these meetings suffered from a ‘notable absence.’ President Trump made his focus abundantly clear by choosing to allocate U.S. representatives exclusively to NATO—snubbing the G7 and their current president, France.

Soft power is the utilization of persuasive forces, primarily in the form of cultural and economic pressure, and Africa has been the target of several soft power campaigns throughout recent memory. Turkey, for instance, has sought a greater presence in Africa over the last few years. From touring nations, to negotiating new trade deals, and making massive investments, Turkey has focused on the region to increase its position in the world and possibly join the BRICS organization, an association of five emerging national economies. Larger players are also engaged in courting Africa for their own ends—such as India and, most notably, China’s numerous investments in the region towards infrastructure development.

President Xi Jinping at the Forum on China-Africa Cooperation in December of 2015. Photo: Government of South Africa

A new player has entered the region, trying to redefine itself and build bridges in the eyes of Africa—France. French involvement in Francophone (French speaking) Africa is not new, but Macron’s administration wishes to rehabilitate the image of the former colonial power. A recent example of this new approach is the latest developments in once-strained Franco-Algerian relations. In 2018, Macron became the first French president to officially acknowledge atrocities committed by French forces during the Algerian War for Independence when the former colony sought independence. Following this recognition, the French government sought to support the Algerian people by advocating for the nation’s “democratic transition” away from the 20-year rule of former President Abdelaziz Bouteflika—again trying to thaw tensions related to the colonial history. But Algeria is not the only African state to receive such attention, Macron has also tasked a team to investigate the French role in the Rwandan Genocide.

The Rwandan people believe the French government should be held accountable for allowing the genocide to occur despite their heavy presence prior to the massacre and allegations that they allowed the perpetrators of the genocide to flee, if not facilitate their escape. Rwanda has even accused France of protecting individuals from the French military for assisting in the genocide. Such beliefs have resulted in continuously soured relations between the two states, a trend that President Macron may seek to end. Macron’s policies seeking to reconcile France with Rwanda, and the rest of Francophone Africa, may be best captured by Rwandan President Paul Kagame’s comment on the efforts: “It makes a change from the neo-colonial positions of the past” by providing a “freshness” to world politics.

President Kagame and President Macron holding a joint press conference in Paris on May 23, 2018. Photo: Office of the President of Rwanda

This new international strategy of reconciliation, combined with the generous military assistance France has provided Sub-Saharan nations throughout the War on Terror, has been met with challenges from the more entrenched foreign soft power brokers. Such critiques include China and some EU members who see this warming of Franco-African relations as a threat to their interests in the region. But where others may see improved relations as an issue, the U.S. may potentially see a lesson to be learned or perhaps an asset to be utilized.

While the United States increasingly defines the road to becoming “Great Again” through primacy, Macron has resurrected the tactics of de Gaulle by positioning France as an alternative ‘bridge’ for Europe and the world to meet through. In doing so, President Macron has sought to create a path back to the center of the world stage, using a path that is fundamentally different from the current methods of the United States. Best surmising the costs of the American fixation on great power politics and military conflicts, France has surpassed America’s ranking on the Soft Power 30 scale—a mechanism from USC that Joseph Nye, the leading theorist in the field of soft power, describes as “the clearest picture of global soft power to date.” This shifting of power, should serve to highlight the need to take stock of our course and decide whether we are proceeding in the proper manner. 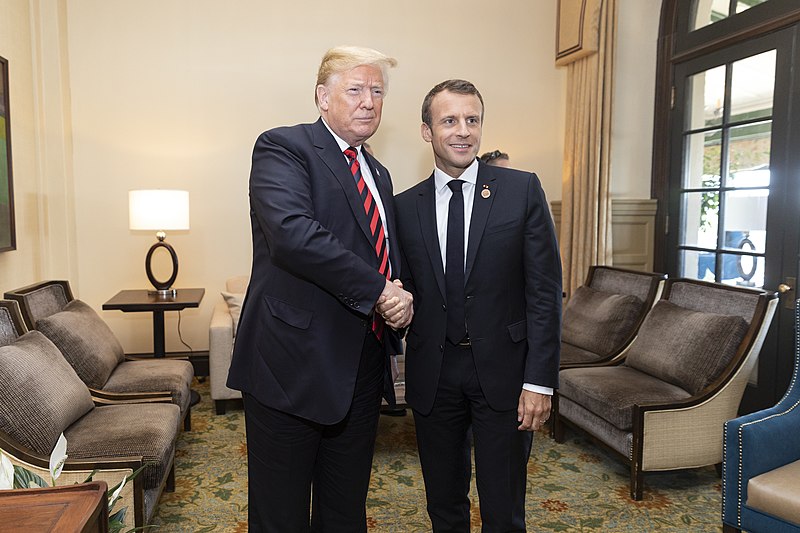 President Trump and President Macron shaking hands at a G7 meeting in June of 2018. Photo: Office of the President of the U.S.

While the political world may wish to shift their focus to Asia and Africa, the United States has found it difficult to penetrate these regions—regardless of the resources we spend there. Be it the over $9 billion dollars spent in aid or the mixed results from joint military endeavors, we have seen our attempts to gain a foothold in the region flounder and the current administration has taken notice of this. But where previous administrations dumped funds heedlessly with little to show, the Trump administration considers it prudent to avoid the topic and focus on the “threats from Russia and China.”

This issue of an increasing shift towards Africa and Asia, however, is not a simple, political fad that the U.S. can hope to see out; rather if the United States is to succeed in these political frontiers, then it must be prepared to either polish its image abroad or outsource the task to a friendly power that is able to cultivate their image.